Massage therapy, in its modern version, was brought to the US from Sweden in the l9th century as part of the movement that created physical education (gymnasium) in our public schools.  All current training in state licensed schools at its basis teaches Swedish massage, in most of the world called classic massage.  These techniques include 5 manual strokes;  effleurage (gliding), friction, tapotement (percussion), petrissage (kneading), and vibration.

Due to the vast numbers of practitioners and benefits, massage as a named type has developed numerous branded versions from Thai to Lomi Lomi (Hawaiian) to medical massage.  Each is a modern version that has absorbed ideas from ancient times in their areas of development.  The Greeks, Roman, Japanese, Chinese, Egyptians all had their recorded treatment regimens.  That modern doctors of whatever stripe still doubt its efficacy simply shows conditioned bias and narrow minded arrogance.  The vast majority of humans find merit in a good physical treatment, regardless of its scientifically measurable outcome.  In China, for example, massage is taught in hospitals and medical schools and is part of primary health care.

Whether one schedules a wellness massage, or seeks out a problem solving (medical) treatment, the standard equipment and techniques though plentiful are similar in their wide availability.

Pain relief and anxiety reduction are the most prevalent expected outcomes from a general massage treatment.  Lower blood pressure and heart rate are temporary effects.  The stimulation of endorphins and serotonin, prevention and support for fibrosis and scar tissue, and increased lymph flow are widely recognized benefits.  Likewise, muscle tone, joint mobility, and a host of sensory improvements results from tendon, muscle, nerve, and bone massage techniques. 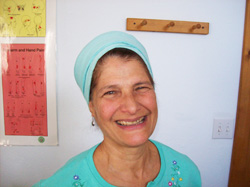 Kartar Khalsa is originally from Puerto Rico.  Since she turned 18, she has been practicing massage.  Her first techniques were learned in Puerto Rico where she was introduced to Swedish massage.  Since l990, she moved to Espanola, and says she “started dedicating her life to learning” more about massage therapy.  In l994, Kartar joined the health center.

Kartar has been healing people and making them feel good, relaxed and happy for 35 years.  Myofascial release, medical massage, prenatal massage, hands and feet, reflexology, trigger point therapy, and cranial sacral therapy are her special areas of experience and interest.